You have been using Roland instruments for a very long time. How do they affect your music creation in terms of sound and workflow?

It's true. The first pieces of equipment I had as a child in 1986 were the MT-32 sound module, PR-100 sequencer and HP-3000 electric piano.
These were based on the home market and great for learning the basics of midi production.
Even my brother who was only 7 years old at the time learned to make his own music.
Since then I have used almost every analog synthesizer and drum machine that Roland has produced at one time or another.

Of course I also have a few favorites, that are still shared by many others around the world today.
At one point if you took a look in my studio it was packed with pretty much exclusively Roland equipment so it's fair to say that without these instruments the sound of my music would be drastically different.
In terms of sound these instruments all very much compliment each other.

They each serve their unique purpose and the combination between them is what has classified my sound as an artist for the most part of my career.
With regards to workflow I have always had an appreciation for equipment that is focused on great sound with an interface that are simple and direct.
Much of the equipment I use has dedicated knobs and sliders for each parameter. This allows for immediate, intuitive interaction, much like the way one would play an acoustic instrument.

You are now considered a master of synths. We understand you started learning analog synthesis on the SH-101. Would you please tell us more about when you started out with it?

To be honest, since I began working directly with you all at Roland - I realize I still have much to learn. One synthesizer though, that I do truly feel comfortable with, is the SH-101. And yes, it is one of the first analog synths I ever owned, along with the JX-3P and MC-202. I still believe that this combination is really all I need tonally to make my music – a simple great sounding monophonic bass line (101), a silky melody (202) and some keys from the JX. Of course being a lover of synthesizers and drum machines for so many years I now own a lot more. But these early ones from Roland are still the main staple and can be heard in many of my pieces to date. 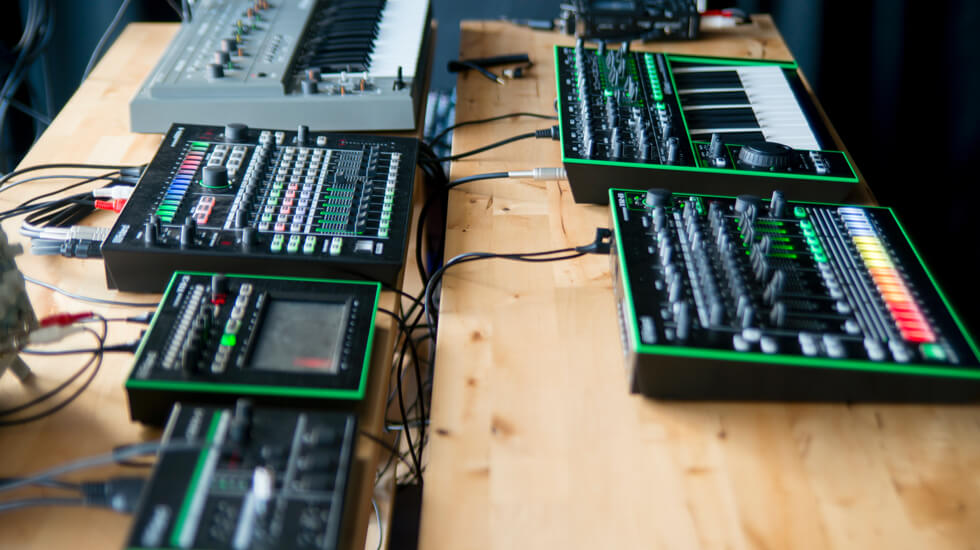 The SH-101 is the signature sound in much of your music.
Why are you so fond of it, and what makes it different from other synths?

With so much innovation in technology the things that still hold their ground with the 101 are the sound and the interface. It is a very playable synth in regards to it's size and layout and the sound is something that really sits nicely in any mix. If you want to add some girth with effects or EQ it reacts well and if you want it to be more subtle and held back it can do this too. So it's incredibly diverse in that sense. It does lend itself best though to arpeggiated sounding sequences and basslines. The sequencer is also a dream to use as it dictates simplicity in your programming. This in addition with the layout of the sliders, keys and knobs allows for you to take a basic sequence and keep things evolving by sculpting the frequencies in ways that create momentum.

The SH-101, with its snappy envelopes, allows for very percussive sounds. How do you feel about the envelopes?

The envelopes are great! I wish other synths had the same ones actually as they really perform well in the role you mentioned. If you listen to my music you can hear the decay and attack times constantly changing as I pretty much hold on to them with my right hand constantly when playing the synth. This gives it a very natural sound that is difficult to achieve with other machines.

What are your thoughts on the 101’s filter characteristics? How do you use it typically?

With a bit of post EQ you can really do a lot with the 101 from making harmonic bell sounds to massive sub bass by self-oscillating the filter. It can be smooth and beautiful or even growling and harsh. Much of the time though I have the resonance off and let the LFO modulate the filter cutoff so as to let the high frequencies bubble their way around in the mix and create their own melodies and phrases.

In which of your tracks can we hear the best examples of the SH-101 sound?

Freedom Engine is 101 and JX, and Marionette uses the same combination actually too. The bassline from Decompression is also 101 and so are the modulating square wave LFO bell sounds. These tracks are all quite different of course and that is due in part to mixing in a bit of effects from an Ensoniq DP4+ to achieve a different result. For example the bass line in Decompression uses an amp simulator and Marionette has a modulating distortion that slowly mixes between wet and dry signals. 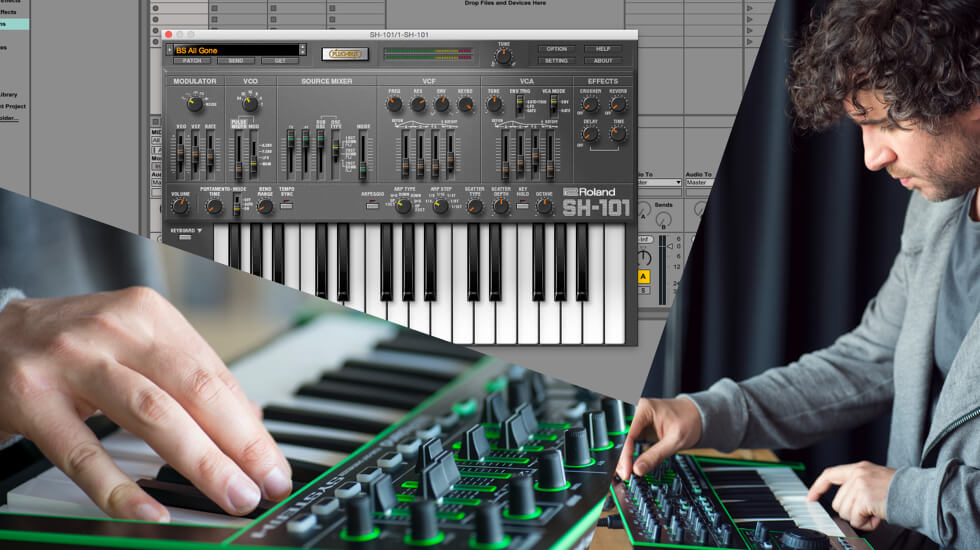 What are your thoughts on the sounds of the SH-101 software synthesizer?

In regards to it being modeled after the analog version it is surprisingly similar – as is all of the new Roland VST's. The color is really there! It sounds like a 101 rather than only sharing the same features like many clones on the market. I think this has a lot to do with the new way that each circuit is being modeled – that being from the ground up bit by bit. Listening to the TR-8 for example beside many other digital drum machines it actually has the warmth of an analog signal. It really blows my mind! So I'm happy to be part of writing a patch bank as my ideas translate fluently.

Could you tell us what kind of presets you are making for the SH-101? How does it sound and how could we play with the sound?

I like sounds that are constantly evolving over time and the LFO on the 101 is great for this. Of course this takes a bit of time in tuning the frequencies to achieve a nice bouncing feeling. I myself prefer when the speed is close to tempo synchronization but just a little off so that it is constantly changing. Many of the patches I wrote have this in mind, so in use you need to gear this idea to the speed of your song as of course each tempo needs a different tuning of the LFO. Rather than making a lot of fancy effects I wanted the patches to be readily usable so I kept things simple for the most part and got deep into the subtleties of sound and attention to detail. The sounds are made to be changed so I hope people will play around with the patches and use them as a nice starting place rather than keeping them exactly how they are. This accentuates the real beauty of analog style synthesis after all. Everyone that uses this method has their own special sound.

Each machine is so distinct, it might be better to say that the machine choses the style rather than the other way around. These drum modules are genre defining in their own right – even to the point that MC's and vocalists are constantly mentioning them by name since they were developed. If I want BOOM then its the 808. If I want aggressive punch, the 909 or 707 just slam in the mix. If your looking for the best analog high hats of all time, look no further than the 606.

What machines in the TR-series do you frequently use in your live set?

Over the years I have used the 909, 808, 707, 727, and 606. I also used them to sequence rhythms from step sequencers on the 101 or JX, and also to trigger sounds from older drum brains like the Simmons SDS-800 and Tama Techstar. These days though I use the TR-8 as it encompasses these sounds and also improves the way in which they can be tuned. In conjunction with the SBX-1 I can trigger the older synths exactly the same way as before using triggers and even shuffle the clocks of things like the TB-303 and TR-808. This is super fun, of course, if anyone reading this hasn't tried it yet!

Please tell us about the preset sounds and patterns you made with the TR-8. What situation/songs did you have in your mind when you created those 16 drum kits and 32 rhythm patterns?

I drew my inspiration mainly from the styles of ambient, electro, house and techno though I made the patterns as diverse as I could. I really hope they provide some inspiration for others that use them. With the kits I wanted to provide sounds that complimented each other well and were in tune frequency wise. The interface of the TR-8 makes this quite easy with all the functions available in one twist or turn. 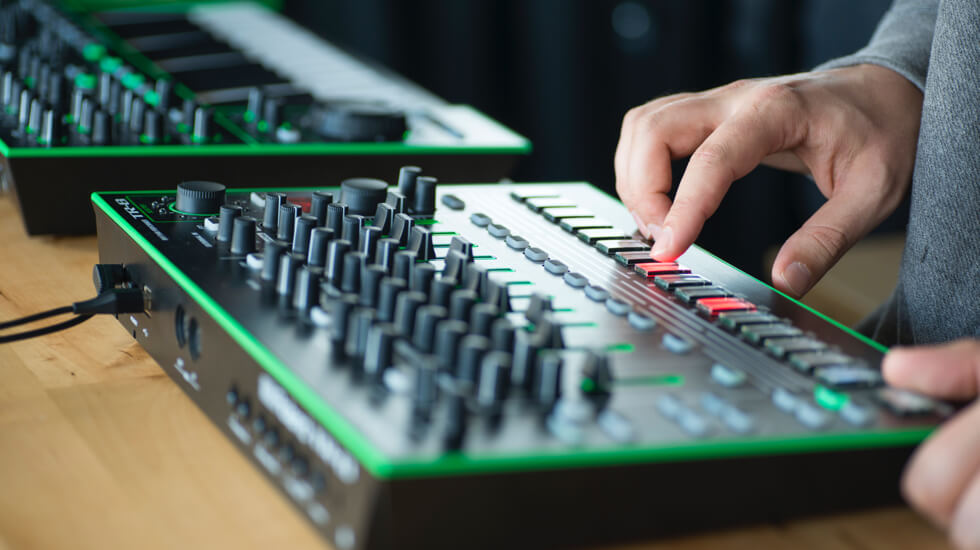 Please tell us about the preset sounds and patterns you made with the TR-8. What situation/songs did you have in your mind when you created those 16 drum kits and 32 rhythm patterns?

I like a variety of different music, so I tried to make diverse patterns. The first eight patterns are using only 808 and 909 original sounds, whereas the second eight patterns are using the expansion of the 727 and 707.
Of course there’s thirty-two because you have the A and B banks.
I made some beats more focused on house, techno, hip-hop, electro.
I think there’s even one kind of drum and bass style, even though it’s not so typical to make those kinds of sounds on an 808 or 909.
I actually did a live set playing jungle and drum and bass the whole time with the 808 and 909, so I thought it would be fun to do one.

I think it’s probably important to comment as well, that with all the patterns that I wrote, I made sure that every instrument had a part.
Every instrument on the TR-808 has a part written on it.
The purpose of having sounds on every instrument is so that people can play with them and strip them down and start from basics, with not all the instruments running, and then have them evolve with the sliders and faders. So if you listen to the pattern themselves with all of the sounds up they are very full.
Also with the patterns that were written, because they were meant only to be used with a drum machine, I was actually using a lot of the sounds to make melodies. So they were tuned in certain ways that were actually kind of making a melody with the beat itself, which sometimes wouldn’t be the case if you were using it with a synthesizer or something like that.

Did you use the TR or SH-101 for your very well received live Fabric mix last year?

Yes I used both the SH-101 and TR-8 actually. Both are essential parts of my solo live show. Both are also heavily used with Cobblestone Jazz too where we improvise everything on the fly. In this situation you don't have time to flip through page menus so these machines are perfect to jam with.

What does the TR series mean to you in a few brief words?

Wow.... I mean.... without these machines the majority of electronic music I love would not exist. So..... Thank you Roland, for giving the means to all of us in taking our creativity to the next level. :-)